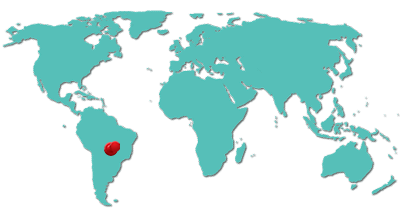 Females enter estrus once a year for approximately five days. Males only produce sperm during the breeding season as well. Peak breeding in the wild is from April to June. Vocalizations and scent marking increase before mating. Most information on maned wolf breeding has come from the study of animals in human care. Scientists have found that the mean number of pups produced is 2.5 (with a range of 1 to 5) with a gestation period of 65 days. Females are responsible for raising pups, but there is evidence that males provide food to their pups in both zoo and wild populations. The pups nurse for four weeks at which point the mother introduces regurgitated food. Pups generally leave the parents' territory at one year of age.

The maned wolf eats small mammals such as cuis (wild guinea pigs), rabbits and young viscachas (burrowing rodents) as well as pacas and agoutis, both fast-running rodents. Insects, reptiles and birds are a regular part of its diet but it also eats fruits, sugarcane and other plants.Maned wolves are omnivorous eaters and primarily solitary hunters. They eat seasonally abundant fruits and vegetables and are particularly interested in lobeira, whose name means "fruit of the wolf." It is a small tomato-like berry that, along with other fruits and vegetables, makes up 50 percent of the maned wolf's diet. They eat small mammals such as rodents, rabbits and insects. Maned wolves rotate their large ears to listen for prey animals in the grass. They tap the ground with a front foot to flush out the prey and pounce to catch it, or they may dig after burrowing prey. They may also leap into the air to capture birds and insects. Long legs help them move through and see above tall grasses. Maned wolves share their habitat with a wide variety of other carnivores: bush dog, crab-eating fox, hoary fox, pampas fox, puma, jaguar, pampas cat, jaguarondi, crab-eating raccoon, hog-nosed skunk and grison. Because of their large size, only the puma and domestic dogs have been reported to kill the maned wolf. At the Smithsonian's National Zoo, maned wolves are fed Mazuri Maned Wolf diet, vegetables, mice and occasionally beef bones for treats. Each wolf eats two pounds of food each day.

Overall coat is reddish-yellow. Hair along ridge of back is longer and may be darker than rest of coat. Muzzle and lower legs are dark. Throat and tail are light. Ears are long and pronounced. Hair along neck and shoulders is thick, longish, and erectile - hence the common name.

The maned wolf stands about 3 feet (90 centimeters) tall at the shoulder and weighs about 50 pounds (23 kilograms).

Maned wolves range through central and eastern South America including northern Argentina, South and Central Brazil, Paraguay, Bolivia and southern Peru. They inhabit the cerrado, the largest biome of South America, which is comprised of wet and dry forests, grasslands, savannas, marshes and wetlands.

Maned wolves mark their territory with powerful-smelling urine and feces on hillocks and termite mounds along their borders. They do not howl, but instead emit loud barks or roar barks to let their mate know where they are, and to warn other wolves to stay away.

While not often hunted for its coat, the maned wolf is hunted as a reaction to its portrayal as a threat to domesticated livestock, particularly chickens. It faces additional pressures as its grassland habitat is burned for human purposes. The maned wolf currently has virtually no presence in Argentina and Uruguay as a result of these pressures. Of note, however, is the extension of their Brazilian range as they exploit recently deforested regions.. 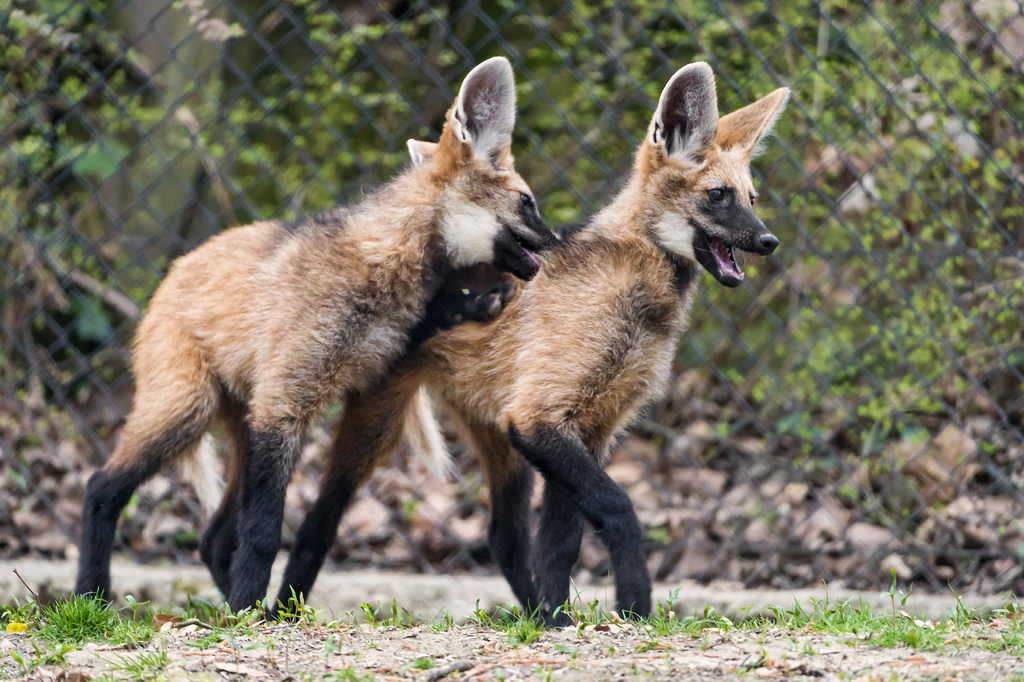 The IUCN Red List of Threatened Species lists maned wolves as near threatened. However, the Brazilian Red List and the U.S. Fish and Wildlife Service Endangered Species List lists maned wolves as endangered. The total population is believed to be below 5,000 outside of Brazil. Habitat analysis suggests that as many as 20,000 may remain in Brazil. Habitat destruction for agriculture and highways is the main threat to maned wolves. The cerrado has been reduced to 20 percent of its original size. General disregard for speed limits leads to significant traffic fatalities. Sometimes maned wolves are killed for their body parts, which are believed to have magical properties. Domestic dogs pose threats through direct persecution and disease transmission. The Zoo has been working to protect maned wolves for nearly 30 years and coordinates the Maned Wolf Species Survival Plan, which includes breeding maned wolves, studying them in the wild, protecting their habitat, and in situ education programs. Maned wolves in human care are susceptible to all of the common viruses of the domestic dog. Current Smithsonian research is focusing on the threats of domestic dog diseases to the wild populations. The typical wild wolf has only one functioning kidney, the right kidney having been destroyed by the effects of the giant kidney worm. Many maned wolves in human care suffer from cystinuria, a metabolic disorder in which the amino acid cystine is not reabsorbed by the renal system.